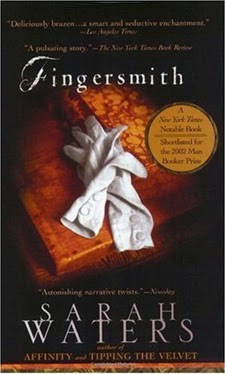 Sue Trinder has grown up in Lant Street. She has never left the slummy Borough of London, and has never wanted to. She has lived her entire life in the care of Mrs. Sucksby, who makes her living farming babies. Sue was the only baby that ever mattered to Mrs. Sucksby. They live with Mr. Ibbs, who makes his living in the roundabout manner or taking in dubious goods through the back door and sending it out the front in a slightly different form. The rest of the household is made up of Mr. Ibbs' invalid sister and John Vroom, a man with a love for dog skins, and his simple girl Dainty. This is Sue's world entire.

One day an acquaintance, known to all as Gentleman, arrives with a plan, to make their fortune using Sue. Mrs. Sucksby has always told Sue that she would be the making of them all and now she has her chance. Gentleman has been posing as an artist, Mr. Rivers, for a Mr. Lilly, who lives out west in the Thames Valley. Mr. Lilly has a niece, Maud. Maud is where their fortune will be found. Gentleman has been seducing the isolated girl but has hit a brick wall. Maud's maid, who was the chaperon, has taken ill and now Maud isn't allowed in the presence of Gentleman. Gentleman has decided to fix that. By installing not only a new chaperon, but one that will help him pursue his interests with the Maud, it is a win win situation.

They will compromise Maud, throw her in an insane asylum, and split her vast fortune and live like toffs. What could possibly go wrong? In a world where there are plots within plots, games within games and you don't know who's playing who, there are a lot of ways this could play out... and perhaps it won't be to everyone's liking.

This was an amazing book, if you only read the first part. Divided into three parts, each subsequent section downgraded it a full star, and some might say downgrading only one star per section is generous, seeing as after the first section Waters has shown us she is capable of so much more. But for some reason I think being overly long and taking the narrative straight into "I don't care land" is a staple of true Victorian writing, or Victorian-esque in this case. Like Wilkie Collins' The Woman in White, which Fingersmith strongly emulates, it overstays it's welcome. Looking back onto the other Waters book I've read, The Little Stranger, I realize now that that book really did have the perfect ending. You weren't sure what happened and it ended a bit mysterious. If Waters had done that with this book, ending on a cliffhanger and being all mysterious, I would have been blown away and ranked it up there with some of the finest short fiction with the likes of Shirley Jackson.

Waters does an amazing job of capturing the seamy side of Victorian London. Sometimes you're reading about other times and think, now that would be a nice place to visit. Not here, not this world. And I think that's what makes the world of the book so real. You feel as if this is probably the most accurate description you've ever read of this time period. It's filth and dirt, it's creaking corset stays on a large woman who never washes herself and the secrets she hides within her bodice. Maud's penchant for gloves, though not of her own doing, at least is some kind of barrier to the grotesques that are discussed. But even they are tainted. Yet it's the unrelenting depravity and filth combined with characters who you don't just dislike, but who have nothing good or nice ever happen to them that wears you down in the end. Sure a little history of Victorian pornography is well and good, but after awhile, you say enough is enough. This book grinds you down, and in the end, you are relieved that it is done.

But the single biggest failing of the book is the repetitive storytelling. By having two different narrators with Sue and Maud, we see the exact same events twice. With part two I was almost skipping pages going, ok, read this all already from Sue's point of view, let's get to the part where we left off with Sue so that I get to the forward progression of the narration. Though once we move forward, it's back to Sue, and back to the ending of part one! We have learned so much from Maud that it is painful to then have to live through Sue's excruciatingly slow journey to learn all that we now know. One step forward, two steps back. That cliffhanger to end part one... it will blow you away. Yet it is soon nullified and made pointless by all the other twists and turns and cliffhangers that come after it. The impact is lost in the dragging narrative. It got to the point where it was like watching M. Night Shyamalan's The Village, I kept not only waiting for the next not really shocking twist, but I got good at predicting what it would be, and in the end you really didn't care. So, by all means, read this book, just don't read past part one... you'll thank me.
Posted by Miss Eliza at 12:00 AM