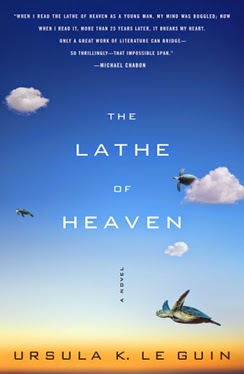 George Orr has been abusing drugs. He doesn't want to escape his life, he wants to prevent his dreams. George's dreams have the power to effect the real world. Not all of his dreams and not in any way you'd expect, but every once in awhile he has an "effective dream" and he wakes up to a changed world. It could be as simple as his aunt being dead instead of alive, or more complicated, like the existence of aliens on the moon; yet George remembers all timelines and sometimes gets muddled. He is sent to a psychiatrist, Dr. Haber. Haber specializes in dreams. Haber uses a machine he has invented, the Augmentor, to force George to have effective dreams. At first George doesn't know if Haber realizes what he is doing and he contacts a lawyer, Heather Lelache, to advocate for him. Soon it becomes obvious that Haber knows exactly what he is doing... and he has an endgame.

I can easily see why this is one of the staples of the science fiction genre. The prophetic nature of the book is at times a little spooky. I had a hard time reminding myself that this book was written over forty years ago. The crisis in the Middle East, Global Warming (or Global Extremism as I like to call it), even the reactivation of a volcanic mountain in the Cascade Range... it was spooky. It was this prophetic nature and the book's distinct dystopian setting that made the book strike a cord in me. I was drawn to the 1984 Big Brother vibe, so when the book would veer into aliens and grey skinned people, I was a little put off. I wish the book hadn't gone so overtly sci-fi. While I agree with members of my book club that a turtle like alien selling antiques is funny and brought in a William S. Burroughs and at times a Philip K. Dick feel to the story, I still long for Le Guin to have grounded it a bit more in reality. Now I'm not saying the power to change the world with your dreams IS grounded in reality, it's just that having this one element changing things and concentrating more on the moral ramifications of someone trying to change the world in this way appeals to me more then aliens selling Beatles LP singles.

I should also say that this book doesn't make for the best bedtime reading because, to put it mildly, it seemed to create a need in my subconscious to go out of it's way to give me crack dreams. Which brings me to Dr. Haber. The arrogance to believe that you can control someone's dreams is so foolish that I wonder how he thought he could bottle this lightning. George himself has had the "gift" for many years and it is a curse that made him seek drugs. If George can't control or understand his own mind, how egotistical is Dr. Haber to think he can do so so quickly. Plus, even with just a subtle change in wording the effective dream could be disastrous. Aliens could land on Earth! George doesn't even know how his subconscious chooses which aspect of the dream will be effective.

Ok, to take this idea further, let's look at a dream I had falling asleep after reading this book. I was at a fancy museum with Benedict Cumberbatch as my "date" (I don't think we were dating, though I wish, but it was more a group of Bright Young Things hanging together). I had an amazing black silk dress that was cut low in the front and a black necklace that had strands that hung in cords, like a beaded curtain, and it shimmered so lovely. I was also looking to find a silver fox stole, though I didn't think it would perfectly match my dress, it would go with a cream one in my closet better (yes, I do have bizarrely detailed dreams). So there was something in the basement of the museum, a threat that we all went to investigate. There was like a catacombs, and below or beside that, an interior space that was also outside, and it was a cemetery. All through this cemetery there were zombies. I had to fight them off and get to the other side where the wall was black, which turned out to be a curtain and I fell down a giant hill on the other side to a weird furnace like area. Now what would be the effective part of this dream? I mean it's a crap shoot. I could just as easily end up with a lovely silver fox stole as I could zombies overrunning the earth... that's just something to think on.
Posted by Miss Eliza at 12:00 AM