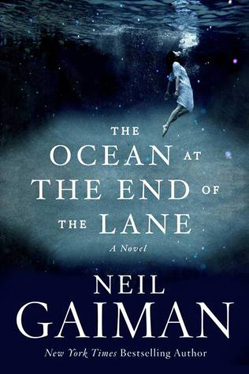 The Ocean at the End of the Lane by Neil Gaiman
Published by: William Morrow
Publication Date: June 18th, 2013
Format: Hardcover, 192 Pages
Rating: ★★★★
To Buy

He came for the funeral, but on his way to the wake he wanders the lanes of his childhood. He doesn't know where he's going until he is there, at the Hempstock's farm. There he remembers his friend Lettie, who lived there with her mother and grandmother, until she left for Australia. But his memories are coming back. She didn't go to Australia, she disappeared in the little pond behind her house that she insisted on calling the ocean. He would have never met the Hempstocks if not for the opal miner. The miner came into their house as a boarder and took the family car down to the end of the lane and ended his life. That was the day he first met the three women. Weird things started to happen after the suicide. Money started randomly appearing and he learned that an otherworldly being used the death of the miner to access our world. Lettie tried to stop this threat, but she made a mistake they all will pay for. The being manifests in our world as Ursula Monkton, a new nanny for the boy and his sister. He needed Lettie's help to get her back to where she came from, but that might be very dangerous indeed. They might need help from more otherworldly beings, and their arrival might be more dangerous than Ursula's. The struggle will be fierce, and in the end innocence might not be it's only victim.

The Ocean at the End of the Lane is an odd little book. It's too long to be a short story, yet too short to really be a novel, instead it's a little meditation on what it is to look back on your childhood. All the muddled memories and half forgotten things that went into shaping who we are. Is this a perfect book? Far from it. Is this Gaiman's best work? No, it's not. But does it connect to something deep within you? Yes it does. It's like a fever dream of your childhood where something triggers a memory and all that emotion floods back into you. All the fears of our childhood. That one nightmare you had where Doctor Octopus killed your parents and no matter how many times they told you that it was nothing but a dream it somehow still feels real. In some reality somewhere your parents died and you were alone. The memory sneaks up on you and for a short time you remember every vivid detail, but over time it fades until you stumble upon it again. When you learn that the narrator has gone back and had his past revealed to him more than once only to forget, you realize the truth at what Gaiman is hinting at. Time, memory, it's mutable. Emotions even change. That which we felt so important as a child is somehow small, but at the same time is still important. As we grow older things disappear and we forget. To regain those memories only to lose them again is bittersweet, much how you will struggle to remember this book.

Neil writes best when writing for children. He has some magical connection to his own inner child that speaks to that within us all. While this book isn't for children, it's about them. The Ocean at the End of the Lane feels like a snapshot of Neil's own childhood, but it has a universality to all reader's childhoods. There's a nostalgia with the time period. Even if you aren't of his generation, there is still that feeling of looking back, when your imagination ran riot and a clearing in the woods was a home you built and the rocks a fireplace, or when the roots of a tree were a vast city for people to live in, or even when a pond was an ocean. So while the book relies heavily on the fantastical, there's another reading of the text. That the fantastical is nothing more then a way for a child to process ideas they don't quite yet understand. This can be seen most with the relationship between the father and Ursula. They are obviously attracted to each other and the younger sister even hints later in life that perhaps their father had an affair. So even if you find the evil that is Ursula a little fantastical, with her otherworldly attributes, look at it another way. She is an outsider with the power to break up the family by her relationship with the father. Everything "other" can have a more mundane explanation. And that is what I really connected to re-reading this book. That the text has these multiple layers, that it isn't just the supernatural, but the natural hidden underneath.

The problem with the book is that it overstays it's welcome. When Ursula has been vanquished and the hunger birds remain you can't help but feel that the story should have ended. The hunger birds are varmints that serve no real purpose in the story and lack the originality of everything that has come before. The narrative seems to have gotten away from Neil and we are just biding our time. This is where you realize that the "book" might have been better served as a short story. Or even interlinked short stories that completely skipped over the hunger birds. This lackluster ending more than anything else makes the book very forgettable. You have an immediate connection, but that connection is slowly severed as you care less and less for what is happening. But in a way, it works. Because you are left with the same problem as our unknown protagonist. You have vague impressions of what you have read, but no real memory. This, of course, doesn't aid in the writing of a review. Trying to catch your feelings for this book is like trying to bottle lightning. The words are running through your hands like water and you're not sure if you have anything to say. After reading this book twice I feel like I have a better grasp on it, but still, it's floating away even as I type this.

Neil wrote this book for his wife Amanda. To dig deep and create not just his typical story, but something different, something brimming with emotion. What I find interesting is that his end result reminds me very much of Terry Pratchett. Seeing as Terry and Neil have been friends for years and years and wrote Good Omens together, there is an overlap in their writing style. But whereas Neil has always struck a more solid narrative line, Terry has always had looser narratives that flow with emotion, that are very dreamlike and profound in their way. Good Omens is an odd little book because I'm not sure it feels very collaborative, with Terry's voice being more prominent, much like his later writing with Stephen Baxter. Prior to picking up The Ocean at the End of the Lane for a second time I was immersing myself in Terry's Tiffany Aching books. Going from those specific stories to The Ocean at the End of the Lane and the Hempstocks, one can't help but feel the similarities between the Hempstocks and the witches, though they are anything but. Therefore I was left with this interesting feeling. By having Neil dig deep and write a book more rooted in painful truth and emotion he has created a book that is, in my mind, the most true collaboration between the two writers, though it's all Gaiman. Terry somehow helped him see another way to write and his wife made him open up and you get this book that cuts to the quick like Terry, but is a wonderful new kind of story.

Though what I connected to most was the sense of loss in the book. Not just the loss of innocence and memory and our childhood, but true devastating loss. When the little kitten is killed by the cap driver the day the opal miner arrives my heart broke as well. This I think, more than the opal miner's death, is when this little boy's life starts to change. Everyone has some time in their life when the happy dream of childhood is shattered forever. It could be the death of a friend or family member, your parent's divorce, a friend moving away, something comes into your perfect golden bubble and shatters your world and you have to start to face the reality of the harshness of existence. For me I had to face reality young, like the narrator, with my mother getting sick. Yet I still look back on my childhood as sunny days playing with my dolls and making up adventures. Though loss has changed me, I'm not the same person I was. This book was like a mainline to all those feels. Things I hadn't thought of in years came back, but nothing hurt more than that little kitten's demise. My best friend was a little black and white cat. We had twenty-two years together and it still hurts everyday that he is gone, and I know that perhaps I can never move on. Neil got straight to the heart of the matter, "the ball of dark fur pressed itself into my chest, and I wished she was my kitten, and knew that she was not." I will never see his like again. Like my childhood it is gone forever.
Posted by Miss Eliza at 12:00 AM