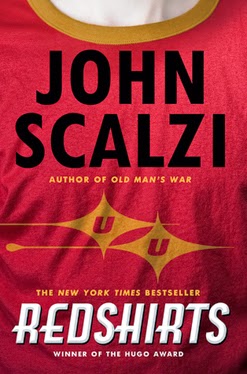 Five disparate young officers have been assigned to the Universal Union's Capital Ship Intrepid. Very quickly they realize this ship isn't like other ships. Everyone seems really busy all the time and capable of the most amazing disappearing feats whenever certain of the officers appear. Also, everyone is really jumpy about "away missions." Looking into it, the newbies erstwhile ringleader, Ensign Andrew Dahl, soon discovers that the "away missions" seem to have a very high mortality rate. Someone ALWAYS dies. Depending on which officer is with them, it might be quite a few someones. In the last five years the death rate has grown staggeringly high on the Intrepid versus other ships in the Dub U. The deaths though aren't the only weird thing. During moments of drama or high action, people's personalities change and they do some of the stupidest things, therefore ending up dead. Convinced that there is some reason for this, Dahl and his gang stumble upon something that could explain everything... but you also have to be batshit crazy to think it plausible.

As I sit typing this review I am wearing a Star Trek V: The Final Frontier T-Shirt, vintage from 1989, not a silly reprint. To my left is a Doctor Who poster, David Tennant if you please, as well as a Buffy the Vampire Slayer clock, which I made myself, and a wall display of Harry Potter wands, Dumbledore's Army, if you must know. Sitting over my left speaker and glaring at me, oddly in a non menacing manner, is Mr. Flibble. To my right there is geekery galore, framed Firefly comics signed by Alan Tudyk and John Cassiday, Daleks and Cylon raiders, a teeny tiny Starbug, Buffy maquettes and even a mini Sheldon Cooper. Why am I telling you all this? Well, in case you didn't know, this would very clearly demonstrate that I am a geek. Not the casual kind either, the going to conventions, waiting hours in line, spending way too much money on memorabilia kind. So, now that I have secured your knowledge of my geekiness... let's talk Redshirts...

This book was written with me in mind. Unless you are familiar with the idea of what a redshirt is, there is little chance you would pick up this book. A redshirt was always the newbie, the character you never knew who beamed down to the planet on Star Trek with Kirk and all the rest and very quickly died in order to show the gravity or danger of the situation. This word has become so ubiquitous in geek culture that in the card game Munchkin, you can have a redshirt minion who will sacrifice themselves so that you will survive a battle. It's a joke my kind get, and it's funny. Redshirts and death are one. The most memorable scene in any movie, in my mind, perfectly encapsulating the fate of a redshirt is Sam Rockwell's breakdown in Galaxy Quest.

What I think my problem with the book was, with movies like Galaxy Quest and shows like Red Dwarf and Hyperdrive and all the rest, if you are likely to pick up Redshirts you are likely to have seen all these other shows and movies based on the same joke. Because, while this book starts out promising, and quickly starts handling the meta issues of the fact that somehow the Intrepid is either a tv show or a tv show is imposing itself on their timeline forcing untold carnage and dramatic scenes before cutting away to a commercial break, it very quickly gets to the point where I was thinking of all the other people who had done this better. Because this is parody sci-fi.

The gold standard in my mind of parody sci-fi is Red Dwarf. This show was not only consistently funny (I'm ignoring the existence of season eight) but, with it's return in 2009 with "Back to Earth," it willingly embraced the meta of comedy shows today, the strongest contender in this category being Community, which started the same year. Yet the meta in Redshirts was written in such a way as to not tax your brain and almost seemed dumbed down. In other words, you could pound out this book in a few hours and it will probably leave no lasting impression. The main turning point for me was when our little gang of rebels with targets on their backs headed back to "modern day" Earth... at this point it's basically "Back to Earth" but without any connection to the characters. It's as if Scalzi  jumped off a cliff and just started ripping everyone off. For the audience this book is targeting, we have watched all the same shows, we know meta, and this book became insufferable and infuriating.

Though, while at this point I didn't think I could want to smack Scalzi more for his lack of originality, he succeeded with the codas to a whole new level of annoyance. Three codas, three POVs, three styles of writing... gaw, how pretentious are you to actually write the second coda in a very unsuccessful attempt at second person narration? Also the first coda, I'm guessing that's you thinly veiled as the "shows" author who comes across as a pretentious prick, and then with the third coda, you rip out my heart and gleefully dance on it. Guess what Scalzi? I'm going to tell everyone I know to just skip this book and watch Red Dwarf... same thing really, only one's actually well written, and it's not by you.
Posted by Miss Eliza at 12:00 AM